WHAT A DAY TO WEAR A SMILE! 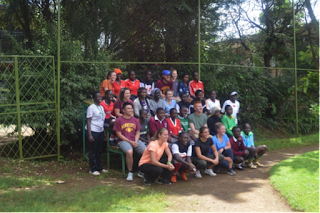 There is always a nauseating feeling that comes your way whenever your parents inform you that there are guests coming over at your place. There is this gist that comes to mind that you want to hide under your bed, or in the closet but here at Sadili, that is quite the contrary. Upon hearing that The University of Minnesota is coming to our home ground, a feeling of ecstasy filled the space around. Yes, they came and also the vivacious, meticulous, animated and ever-smiling girls of Olympic High School were there to feel the inspiration and show their prowess in football. The day was memorable, moments noteworthy, the discussions illuminating and motivational and the football match amusing. 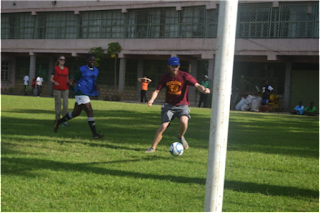 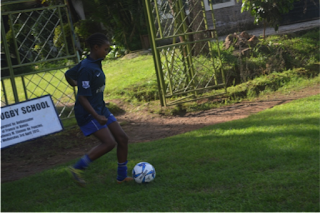 The day was filled with a bunch of activities but I shall only detail about one; that is the football match. Gone are the days when football was seen as a game only for the make gender while girls should be skipping ropes and playing ‘kati’. The girls from Olympic High School are a great paradigm. You should have been there to see how they kick the ball, pass it, swerve it against the opponent, and hit it with the head as if it is their daily bread. It was as if I was watching a game between Barcelona and Real Madrid although I could not pick out one girl to be Lionel Messi and another Christiano Ronaldo. They are super talented and very fast just like the Flash. Subsequently, there were our comrades from University of Minnesota. Most of them admitted to never playing football and find joy in watching rather than playing the game. Nevertheless, they joined the girls from Olympic and battled it out on the football pitch.
I have never enjoyed a game like that in my life. The Minnesota players were vividly afraid of getting hit by the ball but got the essence of it with three of their players scoring for their teams. Talk about being excited. When they scored the goals, their strength came out ten times more so that they could score again and again but the girls from Olympic did not let that go easily. They gathered their momentum, used their voices as a the sole means of communication, hit the ball as if they were playing football for the last time in their lives and showed us that football is indeed their daily bread. 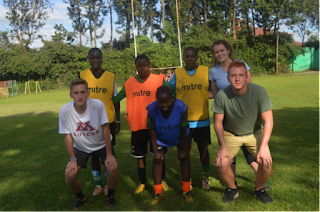 They supported the Minnesota players by joining them to play together. It was indeed a tremendous time for us here at Sadili. The Minnesota team taught us something that Oprah Winfrey once said, challenges are gifts that force us to look for a new centre of gravity. We should not fight them instead find a new way to stand. I mean, they did not know how to play football but by the end of the day, they got a little knowledge on how to play. For the Olympic girls, they saw that they have so much talent hence have the full potential to be whatever they would like to be. They viewed themselves as lucky to have such skills and vowed to tap even more into it to use it as a channel to make a global difference.
To wrap up, this day depicted that life has so many opportunities and it is up to us to take them up. Through this, we get to learn more about the world and the people in it live in peace, harmony and tranquility and as one alone cannot change the world, but I can cast a stone on water creating many ripples on the surface. Being together as the Family of Sadili Oval, Olympic High School girls and the University of Minnesota sure made ripples on the water surface. 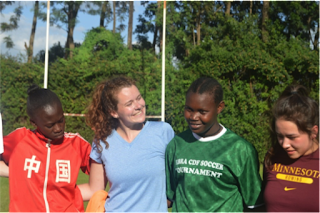 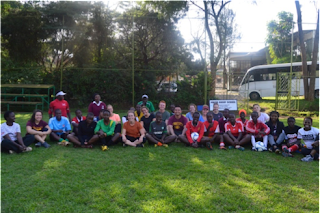 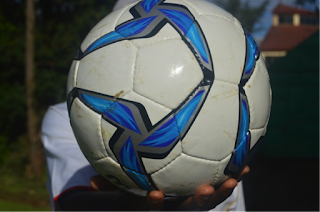 Posted by Girl Power Clubs Africa at 4:21 PM No comments:

Lillian Samba is a certified accountant and an entrepreneur with her own interior design and decor business in Nairobi.

She loves colours, colours inspire her thoughts .Her love for colours is one the factors that motivate her in her interior design and decor business. She also keeps fit by doing by aerobic exercises also known as cardio and yoga.

Her vision in the mentoring program is to see girls become more confident, breaking away from traditional beliefs, embracing and accepting their body's changes as they grow up in responsible, independent ladies who will break some of the glass ceiling that women aspire to break.
Samba's take on image and self esteem is that, "it's not always about how one looks on the outside but the inside matters too. The mirror only givesthe physical appearance but it's also good to evaluate ones inner self, believe in one self and be positive".

Message to the girls,"Know that you are heroes in yourselves from the inside and learn to help other girls so that all of you can move forward. Strive to be all round people by blending your education, with your talents, sport , art, music, passion and interests. Everyone has their time and just because others time has come patiently wait for your time .Most importantly discover your passion then pursue what it entails".

Posted by Unknown at 3:05 PM No comments:

Email ThisBlogThis!Share to TwitterShare to FacebookShare to Pinterest
Labels: ‪#‎GirlPowerAfrica‬

Girl power club participated in the global mentoring walk that took place at the Sadili oval club,rugby pitch .The walk was also to commemorate the international women's day on Saturday the 10th of march 2018.The theme was press for progress.The mentor ship walk brought together  134 girls  from Kibera and the Kijiji which is an informal settlement in Langata.

The walk was coordinated by partnership  with Vital voices  with Dr.Elizabeth Odera being the flag bearer.This initiative comprised of  150 Global Mentoring walks that took place in  over 60 countries around the world.Vital voices has invested in women's leadership has a means to improve the world.The main objective of the walk was to create a platform where  mentee's can freely interact with their mentors at the same time creating visibility around women in sports, leadership and mentorship and most importantly motivate girls of different age groups who are from the informal settlements.

The day started at 8 am, the girls were picked from the various girl power schools.Girl power is a girl empowerment program which in Nairobi  the schools which have the club running are; Olympic High school,St.Aloysius gonzaga secondary school, Nazarene primary school, Kidstar Academy and St.Catherine Education Centre.The guest school was Ngei Primary School.

We most of the pupils arrived , we started with  warm up exercises at the rugby pitch followed by  the girls being split in four groups, the first group consisted of the high school pupils, the second group had pupils from class six to class eight.The third group had class four and five pupils the fourth group had pupils below class four.Each group had a mentor and they would all interact with all the groups formed.Therefore the had to keep time so that they do no overstay in one group.The sadili staff also took the opportunity to join in the groups.


After the mentoring, we had a water break and  photo session.Followed by ribbon cutting to officially start the walk through the Langat'a civil servants estate  to old Uchumi ,clean shelf supermarket took a turn before the national housing corporations houses back to Sadili.

The pupils  walked in a big group and the police was available to offer security.The girls were carrying banners and placards with different  messages on them. The girls sang and chanted as we walked through the estate following our route.The staff on route management ensured that the route was observed  and all were safe.The girls faces were so bright as we were walked and their was  excitement and the joy in their faces.It was a team indeed, which had the aim for empowerment, inclusivity and the celebration of women across the globe.

After the walk we assembled back at the sadili rugby pitch for lunch.Lunch was rice beans and steamed cabbage.Juice as a refreshment .After lunch there was a brief vote of thanks.The students then escorted back to their homes.The event ended at 1:30pm

Posted by Unknown at 2:46 PM No comments:

The girl power sports day was held on the 24th, February 2018.The theme was healthy eating habits. The budget and the checklist and the activity plan had been drafted, typed and saved on the team drive therefore all was left  was implementation. The day started early as some of the pupils had to picked from their various schools, by 7:25 I was already at the pickup point at St. Catherine primary school. The schools attending was Olympic High School, St.Catherine, Nazarene primary school and Kidstar Academy unfortunately St Aloysius Gonzaga secondary school could not make it as they were participating in the schools termly sports activities. In total we had 64 pupils.

By 9:00 majority had arrived apart from Olympic high school later joined at around 10.00 am. The rest registration was done and coach Adongo started with a warm up session. This helped the pupils gather the energy to start the day. The field had already been set up and marked. By 9:30 the pupils had finished the warm up and divided into group. The group consisted members from the various schools thus no school was on itself.
The groups formed were four and the pupils named the groups hence we had queens, champions, mabuda and walafi.

From there the team had a basketball shoot out. Champions and walafi tied with two points each, queens come number two and maduda come position four. Meanwhile Olympic being the only high school engaged in warm up football exercise and played rugby the game being capture the flag. They were playing against themselves in two  groups  of five since they were ten.

After all the games were finished the pupils assembled together where we had a discussion which revolved on the sports day theme of healthy eating habits. The students differentiated what food they considered healthy versus the one they considered unhealthy. We also discussed of what a healthy or balanced diet consists .Eating vegetables, fruits, keeping a active lifestyle and drinking a lot of water was highly emphasized.We then prayed and had lunch which was rice, beans and cabbage, served by Elizabeth, adongo and flora .

The pupils were happy and they were happy to meet pupils from other schools. The event was over by 1pm and the pupils all left together. Joy and adongo cleared the marked field.The sports day was a success and none of the pupils got hurt or injured .One pupils from Olympic at the end got dizzy but was given first aid and she managed to go back to school and after the follow up she was fit and healthy. It is was evident the girls enjoyed their sports day.