This month, our visits were done in 10 schools, with the help of 6 volunteers who 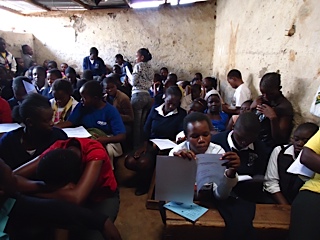 came in to assist with the administration of the Baseline Questionnaire. Initially we had planned for 12 schools but due to some unforeseen circumstances we could not do 2 schools. We did recruitments of new members into the club in most schools. Similarly, we did selections for the girls who will come for the Training of Trainers Workshop on the Goal Curriculum and the Digital Story Telling slotted for April 2013. We selected 2-4 girls per school for this exercise basing our number of selection on the number of girls to be trained per school. We had to do some schools twice because of the page that was missing from the questionnaire. The Baseline Questionnaire was self administered. 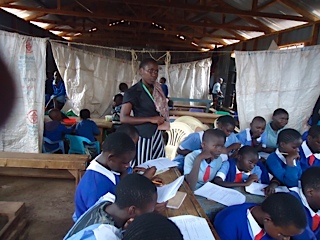 NAIROBI DAY SCHOOL
The current number of recruits is 27, 30 girls filled the questionnaire and 2 selected for the ToT. The questionnaire was filled with ease, only minimal complains were reported.
Some

MAONO EDUCATIONAL CENTRE
We were not able to issue the questionnaire here owing to the fact that the school withdrew from our programme without notice. Our administrators were not allowed to see the girls either. The patron gave a reason for this, saying that most of our programmes clash with theirs thus making it difficult for them to take part in any of our activities.

OLYMPIC HIGH SCHOOL
We visited this school twice, the girls who filled the questionnaire on the first round were 19 , and the second lot was 6. This was because the some of the girls had gone for a football match on the very day we did our first visit. No recruits were made here, and 4 girls were selected to participate in the workshop. 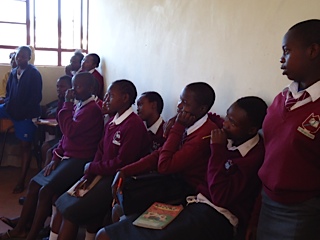 We were unable to meet the girls because the patron was busy with other responsibilities. We made plans for another visit but we could not go because the  patron was away from school for medical purposes. Thus, the questionnaire was not   done and so was the recruitments.

f) MALEZI PRIMARY SCHOOL
No recruitments were done here, but the questionnaire was issued and filled with 12 girls. 2 girls were selected to take part in the ToT. The girls did not have any problems doing the questionnaire as our administrators explained it to them in simpler terms making it easy for them to answer the questions.

g) PARKLANDS ARYA GIRLS
The visit was not fruitful as our administrators were unable to meet the girls due to poor timing. However, we rescheduled for another day, and still we were not able to meet the girls. Their patron gave a reason why, saying the girls has attended another school function so the turnout would be low. She therefore suggested that we plan for another visit next term because the remaining days of the term the girls are having examinations.

h) LANG’ATA BARRACKS HIGH SCHOOL
No recruits were done in this school. 12 girls however did the questionnaire and 3 girls were chosen to participate in the ToT. There was no challenge in the administration of the questionnaire reported.

KAREN C’ SECONDARY SCHOOL
This school had a total of 16 girls who all did the questionnaire. No recruits have been made yet, but they will notify us once they have the new members. 4 girls were chosen tom take part in the ToT Training. The administering of the questionnaire was successful, without any mishaps. 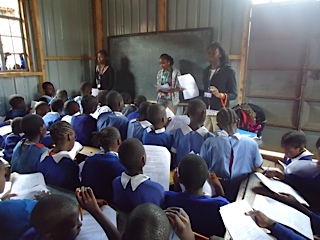 j) HURUMA GIRLS HIGH SCHOOL
Recruitments made here were 4, the questionnaire was done by 15 girls and 3 were selected to take part in the ToT Training. The patron was not in school on the day we visited, but we were able to have a session with the girls.

We faced some challenges in some schools while doing the visits and administering the baseline questionnaire. They were:
Misinterpretation of the questionnaire by some girls
Language barrier where some found the language very difficult to understand. For such cases, we explained the questionnaire in simpler terms that they could easily understand.
Some girls took too much time answering the questionnaire
RECOMMENDATIONS
Use of simpler and clear language
Questions  should be more open and precise
Avoid leading questions
The questions should be shorter as the students complained that the questions were many

CONCLUSIONS
All exercised planned during the visits were accomplished with ease.
Most of the girls understood the questionnaire well and correctly completed it
The number of recruitments made was satisfactory
We were received well in all schools
The girls, the patrons and also the various school administrations were very cooperative all through
Posted by Girl Power Clubs Africa at 9:00 PM No comments: