3 coaches, from Coaches Across Continents, led by Marisa Brown, CAC Monitoring and Evaluation Strategist, visited Girl Power Clubs between the 30th June and 7th July 2012, and ran soccer training for a couple of hors every day. A it was school time, many gils found that they could not make the time, but, when the coaches went into Kibera slums where girls were available, the pitch at Olympic Girl Power Club lit up and many girls turned up. The life skills sessions run by CAC was interesting and many girls hoped that the program me would be adopted by Girl Power. Thanks CAC! 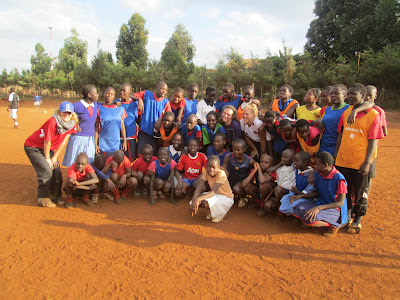 Posted by Girl Power Clubs Africa at 9:53 PM No comments:


Olympic High School were forced to wait for the fulltime whistle and lay their success in winning the 2012 Sisterhood World Cup on pure luck. The winners who boasted of the best midfielders and strikers to boot were kept on the edge by a determined and super-fluid Sports for Life outfit who countered every Olympic High School's every effort at goal.

The match, though tense at first opened up on the 9th minute when Elizabeth Majuma fired first salvo on target which was punched by the best goalkeeper of the tournament, Susan Auma. The result of this threat was a gruelsome and highly emotional second half which led to penalties where the Olympic A stars did shine after a 2-0 win.
Favorites Fail To Go Past Quarters

The semi finals pairing pitting Malezi Primary against Olympic a was expected to raise more dust than the Olympic B- Sports for Life match but soon lost taste when Maureen Kinavidori, Anastacia Mwathe and Mcleen Awino tore past Malezi Primary's Faridah Mwanaidi's gloves in succesion which relegated Faridah's team to the bronze medal third place playoffs.

In the other semifinals match graced by the underrated Olympic A and hailed sports for life teams provided the much needed fireworks to pull a camera's lens. The match played against teams thought to be 2nd tier pulled massive crowds from the stands and onto the touchline, with tournament organizers working hard to contain the charged up spectators. At the penalty shoot out phase, Sports for Life triumphed over Olympic B out of sheer luck after posting a 4-3 win.

Malezi Primary redeemed themselves through Victoria Osite and Elizabeth Majuma who netted in meticulously to give the girls in blue and white a much deserved win against a stubborn Olympic B side. The win came as a relief to Malezi Primary Coach- Joseph Odhiambo who had previously watched his team walk off the pitch in disgrace after their loss in the semis.

Posted by Girl Power Clubs Africa at 6:30 PM No comments: