My name is Esther Mahando and my sister’s name is called Manaaz. When we became friends we were in Class Seven in Langata when Manaaz almost knocked me down. We were in different schools then, but in Form One, we joined the same school. Apparently Esther's parent died and she is left with her older sister who is married.

Manaaz and I are best friends, just like sisters. We both love music and we are very passionate about it. We both love hip-hop and write hip-hop songs. Manaaz is kind of shy but she can rap too. Everywhere we go we must sing songs. Music is just in our minds, but the problem is we do not have any connection or anyone who can help us with our music.

We also play basketball. We really hope our music dream will come true. We love music so much that we find ourselves dancing, singing and writing songs. We hope to get anyone who can help us with that and we will appreciate it. We aint gonna let anyone down.

Girl Power Club has helped us learn more about ourselves and know as girls we have a right and ability to pursue our dreams. I have also learnt how to deal with peer pressure, and how to deal with emotions my emotions as a young girl.
May dreams come true #stay blessed.

Karama Academy Are New Members
The month of June came with blessings we are happy to welcome a new club into our family, the Girl Power Club from Karama Academy. They are a young a school found in Olympic area in Kibera. The club here has twenty young confident girls as members. We hope to enroll more girls as the school grows.

Rains Affect State of Hygiene In Katakwa and Road Access To Tingare and other parts of Siaya
The rains in parts of the country have been extremely high and caused a lot of problems, including flooding and fatalities, and also made it impossible for our staff and volunteers to reach many schools. The patron Katakwa secondary school informed us that the girls in the school are having a hard time since they do not have toilets which sunk due to the rainy weather. This was particularly so for many of the schools in Siaya County, which has a very poor road network. However, there was a strong attempt for every club to try and run some Girl Power sessions, for which we congratulate the patrons and the facilitators in these two constituencies.

This term is also for Term 2B games, which include volleyball, soccer, netball and athletics. Many of our girls are defending champions,and therefore it was obvious that the sessions were going to be more focused on the local, provincial and regional tournaments during the term. We are proud to say that many of the Girl Power Clubs were represented in the games, and congratulate Bishop

Life Skill Sessions in Clubs
BUSIA SESSIONS FOR MAY AND JUNE

Nazarene School Learn About Hygiene
Nazarene held their community week on the 3rd of June 2015, and Girl Power Clubs Africa was on hand to teach the who school on two topics:
- How to use a toilet safely
- Importance of washing hands
Kibera Space Changes Lives Through Sports
The tennis and basketball court sessions in Kibera are progressing on well when the weather allows. Although its a mixed crowd of boys and girls, life skills are taught together and separately. Recently, the girls there had a chance to be interviewed by a reporter from the Nation Newspaper, who will publish their story in the kid’s segment, the Young Nation. The interview was based on basketball. The children were very cooperative and they are looking forward to seeing their story and photos in the newspapers.

Interns Provide Good Support
Intern college graduates, Loise Ngeke and Everlyne Sigilai, continue to be of great assistance as they
learn and develop their skills they have accomplished a great deal of work. With their help we have entered the entire base line survey questionnaire in sales force and our reports in Ushahidi are up to date.
They have grown more confident in facilitating sessions in schools and though we are behind by two sessions according to our calendar of activity, the sessions covered are very well facilitated and there is adequate preparation made. We are confident that we will catch up and complete the sessions as planned.


Reporting On Salesforce
All baseline surveys conducted in 2015 have been entered in Salesforce. The records of the girls whose parents did the community impact assessment interview have been updated. In Nairobi all sessions have been updated on Salesforce except the monthly Girl Power Sports Day activity.

Following discussions with Tesora of Women Win, and studying the software, we finally have found a way to edit data in Salesforce in particular adding missing data. This has enabled us to input data of girls who joined in late after registration had been done, and up dated their session attendance records.

Our Website (www.girlpowerclubs.com)
Our website sitting on the Ushahidi platform is being updated regularly and we are very pleased with the progress. We have all our records up to date from Nairobi. Siaya has had a bit of problem with their mobile phone as well as Safaricom connectivity in the rural area, which we have sorted out by changing the service provider to Orange and we expect to see their posts soon. The advantage of this site is that we are able to pin-point in a map exactly where each school is located and follow their activities!

Baseline Survey Queries - things to improve on
Making entries in Salesforce has been a learning experience in the use of Salesforce as a reporting tool. We face several challenges some of which we leant to solve along the way. We noted a few things though in the baseline survey that need to be addressed
In the next survey we need to ask the children to write all their three names so that it’s easy to differentiate them.

Girl Power Clubs Sports Days
Nairobi - The girl power sports day for the month of May was a success. The June Sports Day has been postponed since the venue we use has been booked for an activity by a different school on the same day. The girls are asking if we could have music on the sports day. Some girls are also requesting for swimming as a sport be included on this day. So far we have soccer, rugby, netball and volleyball.
Siaya - Girl Power Clubs will hold their first Sports Day on the 4th July 2015. Its expected to be a great success, and more than 200 girls will be participating actively in running the day as the teams compete in soccer, netball and volleyball.

Parent Guardian interview
The records of the girls whose parents had participated in the community impact assessment have all been updated.
Internet
The inconsistency of the internet is affecting our reporting process in Salesforce and PIWIGO. We should have a modem that we can use when there is no internet.
SESSION COVERAGE BY SITE TERM TWO
BUSIA 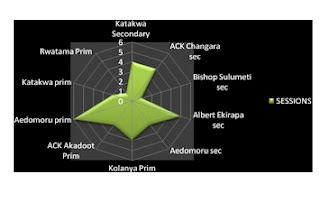 SIAYA (to be included once data entry is resolved)

Posted by Girl Power Clubs Africa at 7:02 PM No comments: