OPEN CONFERENCE ON THE KENYA CONSTITUTION 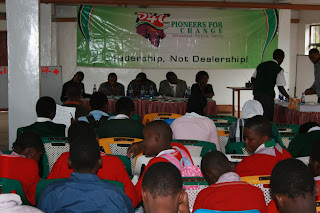 The Girl Power Clubs had a special opportunity to learn
about the Kenya's Constitution and how to take advantage of it, at an open conference for teenage boys and girls held at Sadili Oval Sports Academy.
The boys were also given the chance to speak out and be heard and in so doing, promoting gender sensitivity and equality. The conference also acted as a platform for the launch of the BOYS 2 MEN INITIATIVE which has recorded massive improvement in its registration since. 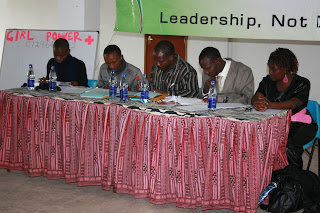 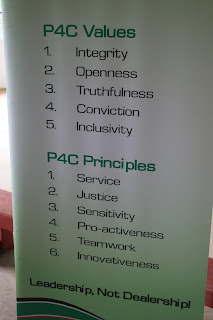 Participants learned about the work of the newly created positions
in the lines of the senate government and devolution, both new aspects that grace the pages of the newly enacted constitution. It is also important to note that the young enthusiasts in attendance
were also equipped with preparation skills in dealing with the coming general elections in 2013. Since the 2007 post election violence, when the country had been torn apart along ethnic lines, efforts towards national healing have always been pooled together among different social classes. This conference, which was held by Girl Power Clubs, in partnership with the Friedrich Ebert Foundation's PLDP and Women Win, delivered much needed lessons in ethnic co-existence and national cohesion. The attendees who came from different secondary schools had their own unique stories with regard to the atmosphere surrounding the events during and after the elections, when the country was in the doldrums
All youth pledged to continue with the healing process in their communities and that each one will see the country hold free, fair and peaceful elections come 2012.
Special thanks go to Sadili Oval, the Girl Power Clubs, Women Win, PLDP and Dr. Liz Odera for bringing together the 46 boys and 62 girls in an interactive and highly informational conference.
Posted by Girl Power Clubs Africa at 4:10 AM No comments:

The noblest of all ideas to have ever come into reality in the Girl Power Program is the Entrepreneurship vision, with initial support from Women Win and Platinum Credit, in what is a trial run. The business competition was initiated with an aim of teaching and instilling self financial sustenance within young girls and at the same time have entrepreneurial skills embedded in the minds of the young girls. Platinum Credit was on hand, led by their CEO, Brette Sievewright to offer financial advice and teaching to the young entrepreneurs. Out of the 12 schools that handed in and defended their business proposals, 9 schools won cash loans to facilitate start of their businesses.
1. Universal Primary– proposed opening a snacks shop received ksh. 7000.00
2. Karen C’s beadwork,crotchet, cardmaking and poultry keeping proposal received ksh. 7000.00
3. Holy Unity– Proposed selling stationery and received ksh. 7000.00
4. Maono Educational Centre– received ksh. 5000.00 for selling sanitary towels, stationery,snacks and soft drinks
5. Malezi Secondary school received Ksh. 5000 for their idea involving the selling of confectionery and snacks
6. Huruma High School received Ksh.7000.00 for their venture in beadwork and card– making
7. Malezi Middle School-proposed a confectionery and stationery business and were granted ksh. 5000.00
8. Shalyne Academy– proposed a unique groceries venture and won ksh. 3000.00
9. Muslim Girls Secondary School received ksh. 5000.00 to start a juice making and confectionery business

It is worth reporting that the projects are growing to fruition as some schools have been able to return the wholeamounts loaned to them. An indicator of flourishing business.
Posted by Girl Power Clubs Africa at 2:24 AM No comments: